According to the father of two who is on the verge of sending his wife to Australia for her master’s program, he figured out the truth about his son who is not his biological child.

Taking to an anonymous source to share his story, he expressed utmost shame to confront or open up to anyone about his findings.

“The DNA result said one of my kids don’t belong to me. So I got married 2016 and we have two kids already, boy and a girl, with 6months pregnancy. I went for DNA test on my two kids 3weeks ago and d result shows that my son is not mine, the gal is mine tho.

My wife is not aware cuz she is currently expecting a baby in 3months time. I’m so heartbroken, I even challenged d results in another lab and they confirmed the boy to b a bastard and already I’ve spent #1m+ on it. I did the test cuz wifey will b travelling to Australia for her masters next year, and I’m d sponsor, so out of curiosity I opted for a secret DNA and I’m so broken.

Nobody knows this as of now cuz am even ashamed of telling anyone. I want to file for divorce straight away but i don’t know how to go abt it cuz she’s heavily pregnant. Secondly I want d kids(all of them) to go with her cuz she did me very dirty, this is someone that NEVER lacked anything and I loved her sooo much.

She knows nothing abt d test although I give silent treatment to her and the boy. seeing her wen I’m back disgusts me so much and I don’t want to bear d pregnancy expenses henceforth. the thing is the gal is older than the boy meaning she slept out while we r married. she’s 31 and me 37 I just need honest opinion of ppl devoid of emotions cuz I can’t think straight. I don’t even treat my own child(gal) right anymore cuz of ds shit,” he wrote. 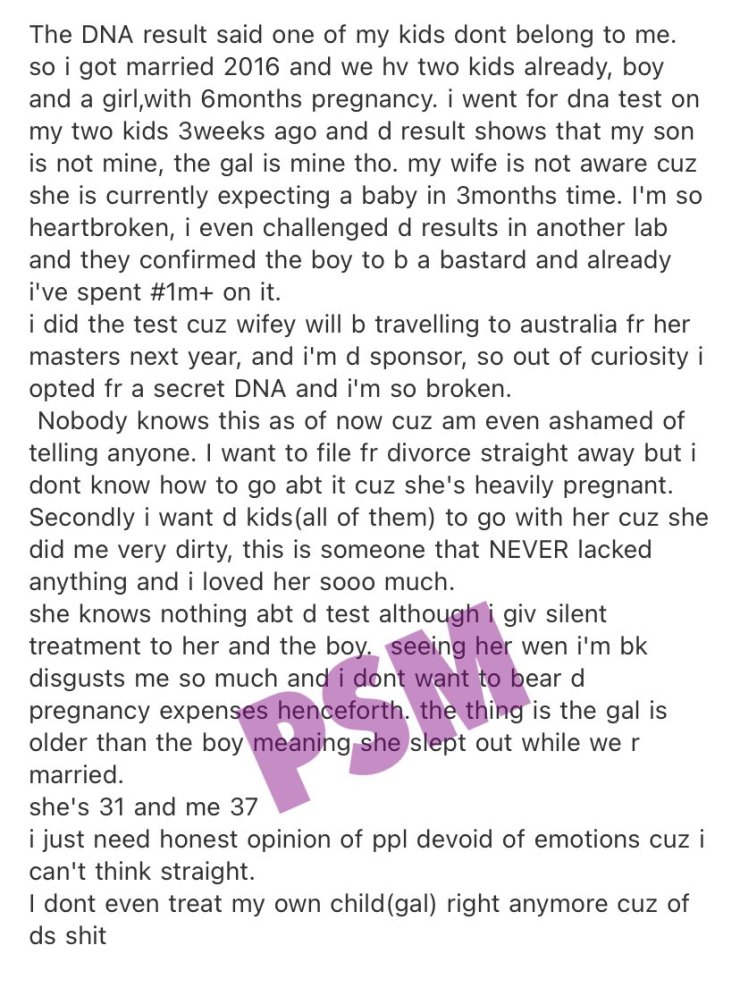 Neymar is better than Messi & Ronaldo-Cafu

Brazil qualify for the 2022 World Cup

“Who is a celebrity?”-COP Kofi Boakye slams celebrities who demanded for special treatment for their status