It’s hard to know quite how long Manchester United’s board will let this show run. It wasn’t quite the 5-0 humiliation of Liverpool two weeks ago. It was every bit as one sided though. There was a poignant cameo: on 25 minutes in this game, when Manchester United crossed the half way line for the second time.

Luke Shaw delivered a decent cross and Cristiano Ronaldo connected well, forcing a fine save from Ederson. In the scramble to reach the rebound, Mason Greenwood pushed the ball wide. Still, it was a chance and the home fans turned up the volume. Suddenly it felt like a derby. You could almost imagine it was a competitive contest. After all, it was still 1-0. 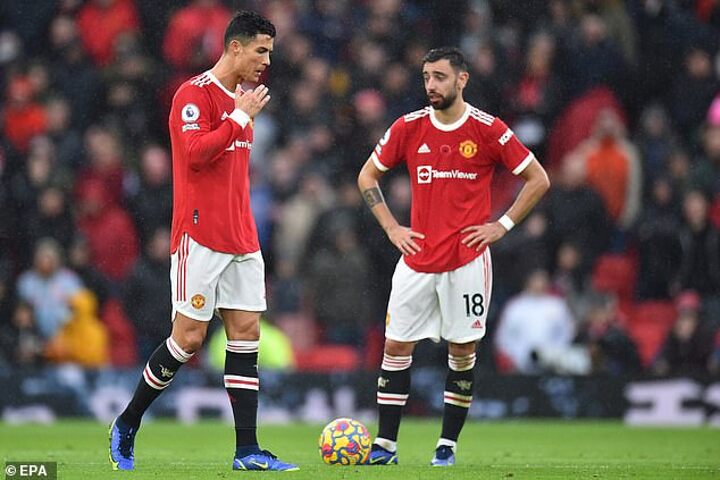 It was, of course, an illusion. When Old Trafford roars these days, it’s like an echo of the olden days when they were once great. The sight of an aging Cristiano Ronaldo in the No.7 shirt only amplifies this sense.

‘Here’s what we once were,’ that roar seems to say. ‘We were mighty too – once.’

No longer. Football has no time for passengers travelling on the back of their past glories. ‘The city is ours,’ they sang in a far corner of Old Trafford where the away fans congregate. It has been for almost ten years now. Children have grown up confused as why United are held in reverence since they last resembled title challengers.

Another cameo from an abject afternoon for Manchester United supporters. In the opening exchanges, when the stirring encouragement of a still-hopeful home crowd was ringing in the ears of the United players, Kevin de Bruyne stumbled in midfield as he received the ball. 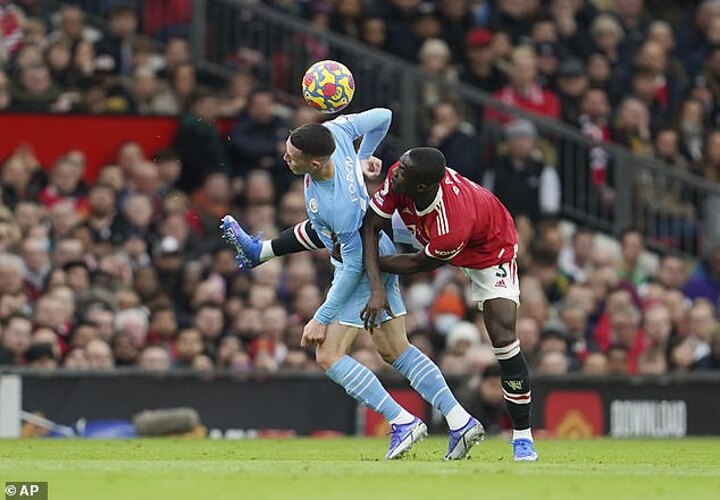 No matter. There was still plenty of time to get up, steady himself and play a forward pass, so lacking in zeal were United, so far from being a team that harries and presses that a fall whilst in possession of the ball really wasn’t an issue. To be fair, worse players than De Bruyne are made to look good by this United team.

A few minutes later, De Bruyne received the ball in midfield, had time to turn 180 degrees, drive on and play his pass. Still, there was no player within five metres of him. This against a team playing two holding midfielders. Scott McTominay and Fred are good players but they would doubtless concede they are not picked to be superstars.

They are currently playing together because Ole Gunnar Solskjaer has decided that playing his full hand of attacking options leaves his team far too open. McTominay and Fred are there to add energy, to close down and win the ball. Yet so disorganised is this team, they can’t even effectively perform the job for which they’re picked.

On 18 minutes, the die was already cast. Possession stood at 75 per cent in Manchester City’s favour and United were 1-0 down. David de Gea was lining up a goal kick and took matters into his own hands. United had been attempting to play the ball out from the back. De Gea could see this was pointless, City have a team of gifted midfielders – literally. They aren’t bothering with forwards anymore. 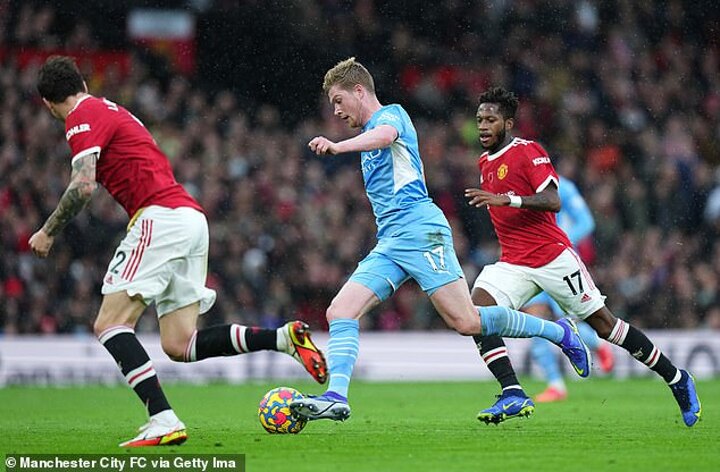 Unlike United, they do press the ball in systematic and disciplined way. So United could try to play the Pep Guardiola way and pass their way through from the back. The idea they could was a vain conceit, an impossible dream.

De Gea saw this and simply changed the game plan mid-half. He signalled the players up the pitch and determined to kick long. Old Trafford cheered in approval. Maybe a signal came from the bench, It’s hard to be sure. But it smacked of a team in search of a leader.

Because Manchester City weren’t outstanding here. They were, of course, very good. They did, naturally, dominate the game. They certainly passed the ball with a crispness and surety that few teams in the world possess. But they have played better and had they hit top gear, they might have been 4-0 up at half time, as Liverpool were.

The chasm between the teams was not so much the quality, for if you line up United’s eleven best players, it would be hard to say they’re miles behind City’s individually. No, the gap between the two was in the absence of a coherent plan. 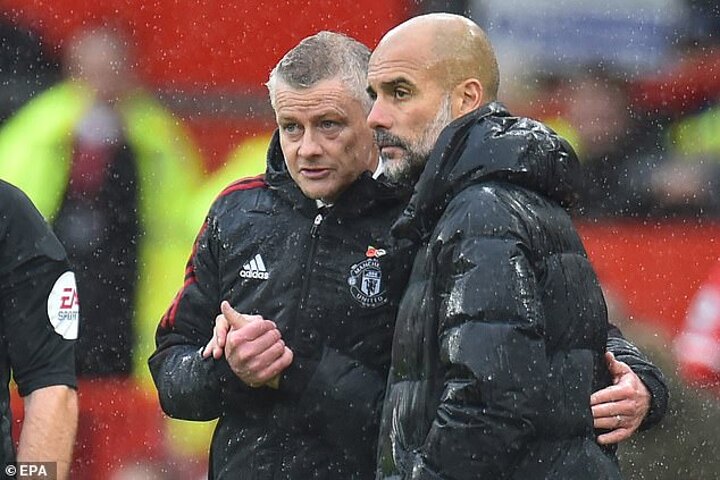 Having done so well with a back three against Tottenham and so dreadfully with a back four against Liverpool, United’s line-up for this game was pretty much an open book. A book, surprisingly enough, Guardiola took the time to read. Three at the back you say? So what if we don’t bother with any forwards? What might your three defenders do then?

Guardiola is a pioneer of the idea that you can get by without a centre forward but this was testing that philosophy to the extremes. Gabriel Jesus and Phil Foden were out wide and Araon Wan Bissaka may be waking up in his sleep for weeks to come amidst an anxiety dream in which he forlornly chases Foden. De Bruyne, Bernardo Silva and Ilkay Gundogan all operated in midfield in front of Rodri.

Nominally Silva was probably the furthest forward. But in reality no-one bothered much engaging with Harry Maguire, Eric Bailly and Victor Lindelof. The didn’t need to when Bailly was clumsily hanging out his leg to score the opening own goal.

They simply picked off United players and then played keep ball among themselves. United’s back three weren’t smart enough to send one of their number into midfield. They had no one to mark and looked absolutely lost. When runners did come from deep, as Bernardo did to score the second from Canceo’s lofted cross, they seemed amazed and reluctant to engage. 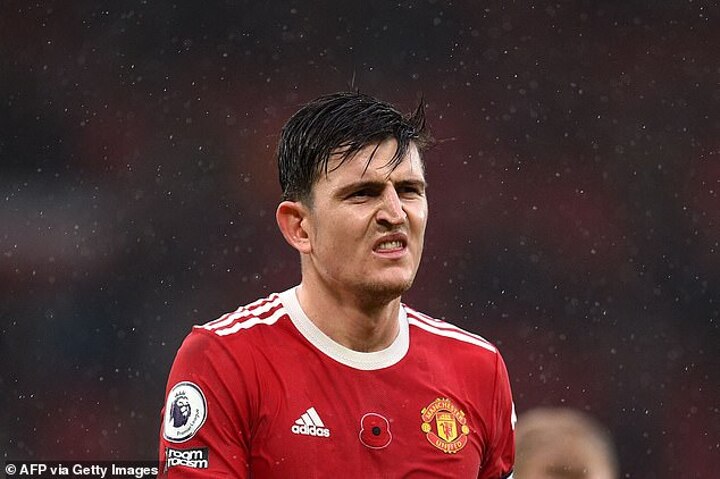 It took until half time for a decision for Solskjaer to change to a back four. And there was a marginal improvement when they did, though the extra attacker brought on was Jadon Sancho, a player whose joie de vivre has been smothered playing in this disorganised United side.

As such, the impact was limited. And it’s questionable whether City were really turning the screw. It felt as if they were doing just enough. In reality, there was no real way they could lose this game from 2-0.

‘Ole’s at the wheel!’ sang those City fans mockingly. ‘Five more years!’ they continued joyfully. In a world of systematic football, coached patterns of play and microscopic data analysis, United’s players look bereft, an army without an effective leader.

They are devoid of confidence, as though they have no faith in whatever instructions the have been given. It’s hard for a coach to come back from that place.