The husband of Halyna Hutchins, the cinematographer who was shot dead on the set of Alec Baldwin’s movie ‘Rust’, has hired lawyers and is set to file a wrongful death lawsuit, according to a new report.

Hutchins was shot and killed during rehearsals for the film in Santa Fe, New Mexico on October 21.

The news of the lawsuit comes as Rust armorer (Crew member responsible for providing arms on set), Hannah Gutierrez Reed said she’s not yet ready to speak about what happened after her lawyers claimed a saboteur put live round in gun Alec Baldwin fired.

Sources told the outlet that there will be multiple defendants in the suit and it will be filed on behalf of Matthew and their son Andros, nine, following Halyna’s death on October 21.

Hannah Guiterrez told Fox News Digital Wednesday, November 3: ‘It’s only been two weeks, and I’m not ready to speak on it yet. That’ll come. 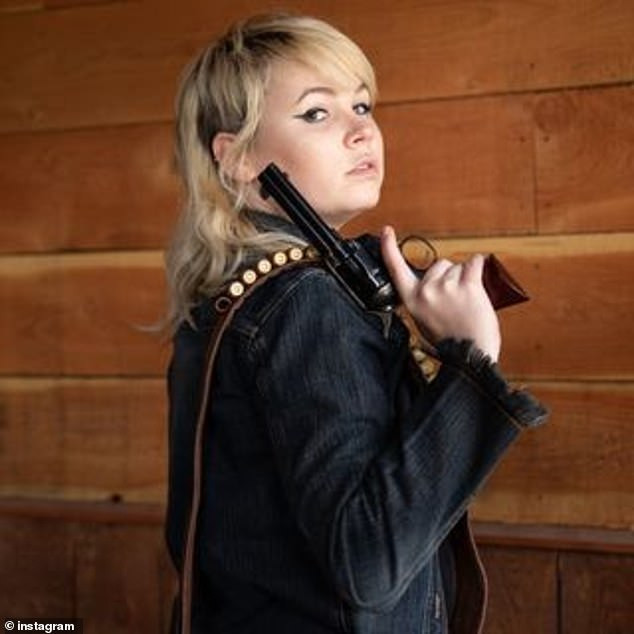 ‘At this point in time, I’m just referring and directing everyone to my lawyers.’

His lawyers suggested that a disgruntled film crew member may have planted the live round that killed cinematographer Hutchins inside a box of prop ammunition in a bid to ‘sabotage’ the film.

In the wake of the fatal shooting that also wounded director Joel Souza, several crew members have come out claiming that they were overworked and denied hotel rooms in the vicinity of the New Mexico set.

During an interview with the Today show’s Savannah Guthrie on Wednesday, Gutierrez Reed’s attorneys then used the theory that one of those ‘disgruntled’ crew members may have planted the live round on set as an act of revenge. 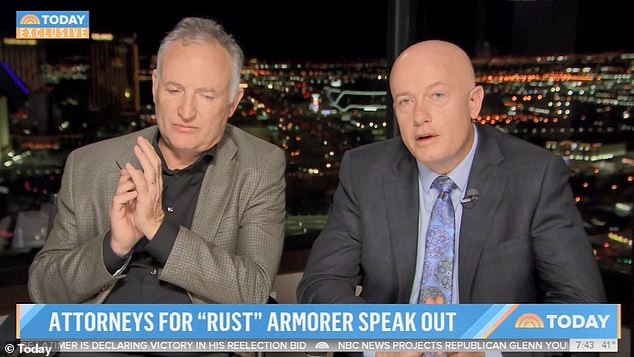 ‘And we know that people had already walked off the set the day before… and the reason they are unhappy is they’re working 12 to 14 hour days, they are not given hotel rooms in and around the area, so they had to drive back and forth an hour to Albuquerque, and they’re unhappy.’

Gutierrez Reed has not been named a suspect, or charged with any crime in connection with Hutchins’ killing, but she has hired lawyers.

Bowles said his client was unaware that any live bullets were loaded into the gun before the deadly October 21 shooting near Santa Fe, New Mexico.

‘There was a box of dummy rounds, and the box is labeled “dummy,’” Bowles said. ‘[Gutierrez Reed] loaded rounds from that box into the handgun, only later to find out – she had no idea – that there was a live round.’

The armorer then handed the pistol to assistant director David Halls, who, in turn, passed it on to Baldwin and announced ‘cold gun,’ indicating that the weapon was safe to use, according to authorities investigating the shooting.

Gutierrez Reed’s second attorney, Robert Gorence, revealed that while the Colt had been locked away in a safe, the box of dummy ammunition was in a prop truck, which was ‘completely unattended at all times, giving someone access and opportunity.’

Gorence also said that after the armorer retrieved the gun and loaded it with the rounds from the box, it was left unattended on a trey for two hours ahead of an afternoon film shoot.

Gutierrez Reed’s lawyers defended her actions that day, saying that the loaded gun was not in her care for the entire duration of the filming because she was expected to perform two jobs on set: as an armorer and a props assistant.

Bowels said that after lunch, Gutierrez Reed handed the gun she had loaded earlier to Halls and then went about performing her other duties as a props assistant.

But the armorer’s legal team admitted that she did not inspect the gun to ascertain that the rounds inside the chamber were not live ammunition.

Gorence explained that Gutierrez Reed was not inside the church set at the time of the shooting because it took place while cameras were being set up, and not during filming,

‘She wasn’t there,’ the lawyer stressed.

Meanwhile, ‘Rust’ camera assistant Lane Luper, who quit on the eve of the shooting, told Good Morning America that there were only two safety meetings on set and said production did not take gun safety seriously which he said resulted in two accidental weapon discharges and one accidental sound-effects explosion.

‘I think with Rust, it was the perfect storm of the armorer, the assistant director, the culture that was on set, the rushing. It was everything,’ he said.

The Holy Spirit inspires me to speak English – Cecilia Marfo